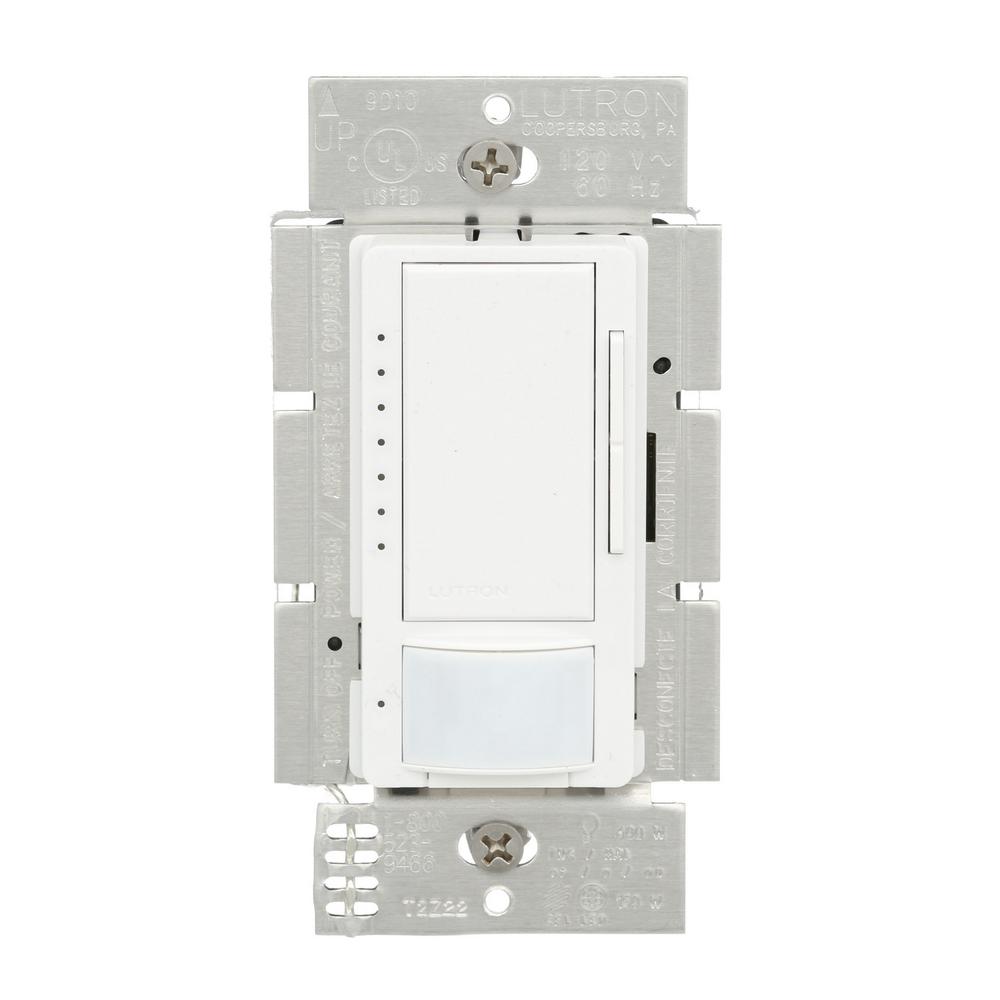 This post is being written in mind with people who are used to wiring 3-way switches and other home electronics. If you are inexperienced with home wiring please seek someone who is, it’s not worth damaging your device, electrocution or possibly causing a fire. Anyhow onto the problem.

This was a weird one and I blame Lutron for their instructions not being clear enough. I have done plenty of wiring, home wiring in theory is always really easy – it’s the people who don’t know what they are doing that make it harder for everyone else. Therefore the theory doesn’t match up with reality most of the time. Those picture perfect youtube videos are very far from what we are all used to most of the time. Therefore it is VERY important to just understand what is happening inside of your electrical box, if you can interpret the wiring, then you can fix any rat’s nest of garbage other people leave behind.

The problem I ran into here is that I wired up TWO Lutron Maestro MSCL-OP153MH-WH occupancy sensors together. I know for a fact that they were wired correctly. I checked and rechecked the wiring and I followed everything back to where it originated. In short, I know what I am doing.

I said I blamed Lutron for their instructions not being clear enough and I stick to that for the following unclear information:

When ever I have installed 3-way switches in the past – I needed two of them. So I purchased two identical Lutron occupancy sensors which are 3-way switches. I read that passage above and the part that confirmed my thoughts is the part that says “If using Companion Dimmer(s) for a 3-way application, additional programming is not required.” – Sounds great. Well I installed both switches after unravelling the bullcrap that the previous owner left behind for me and nothing worked. The lights would NOT turn on and all I got back in response is a bunch of blinking LEDs running every which way from both switches. Totally weird and unexpected.

After doing a little more digging online I come to find out that “Companion Dimmer” doesn’t mean what I think it means. It DOES NOT mean a second occupancy sensor – it is literally a different type of switch you should purchase unless you want to continue using the mechanical switch you had in place already. Wow – that’s really not clear Lutron because you are using plain english and not model numbers or an ID like “Maestro” so that I know you are talking about a PRODUCT not a second switch of the same type as is traditionally used in a 3 way installation.

Fix to the problem

The fix was easy actually, I just needed to get over the 3 hours I lost of troubleshooting first, I was mad. I removed one of the occupancy sensors and put back one of the mechanical switches because I didn’t have the “Companion Dimmer” handy because I had NO IDEA I would actually need it. Just follow the instructions as you CANNOT connect all three terminals on the mechanical switch. This tells me that the Lutron switch is doing some additional tricks with power to interpret the three way switch on the other side. I say this because after the installation, during testing you could flip the mech switch, wait for the light to timeout then flip the mech switch again to turn it back on. This means that the Lutron switch is interpreting the pulses being sent to it. Smart digital design, just totally caught me off guard after being so used to analog wiring for so long.