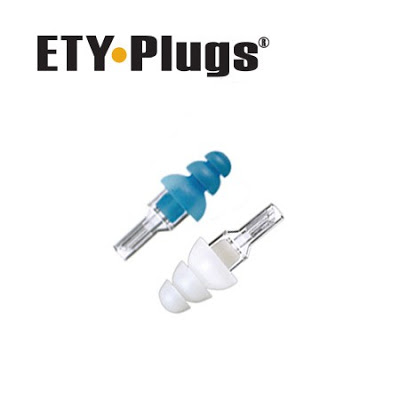 These are called Etymotic earplugs, I call them hearing savers. I have the exact pair shown above (the blue one) – you can get them for about $20 and they are totally worth getting. The use case for these earplugs is when you have to be in a noisy environment, but you still need to hear what is going on. These plugs will just lower the noise/volume by 20dB allowing you to still hear what is happening comfortably and basically crystal clear without having to worry about not being able to hear later.

These are ideal for:

These earplugs are NOT suited for:
The hardest thing to understand about using these earplugs is how to put them in your ear. They are slightly curved, so you need to practice putting them in. The included strings are optional to use. When you aren’t using the strings, people basically don’t know you are wearing them until you point it out or if they look at the side of your face. Honestly – I don’t care about looks, I just want to not go deaf when I go to a concert or a loud social gathering.

You were cleaning your Etymotic earplugs after using them – as you should because they get pretty nasty after long use. Woops – water got inside of the plug… crap… how do you get the water out? Ambient drying will take too long or never fully dry which will render them useless and somewhat dangerous because of the possibility of mold growth.
Depending on how gunky you get your earplugs, you should consider using very mild soap to break down the ear wax and gently work it around the earplug. Then rinse thoroughly with water. If you don’t hold the opening of your earplug down away from water, you will get water into your earplug.

This isn’t a big deal if your earplug came equipped with a lanyard or string that holds on to your plugs. To get the water out of the plug:
If this doesn’t work for you, you should probably buy a new pair as instructed by the manufacturer. They recommend every 3-6 months if you use them heavily which I do not. I have had the same pair for more than 4 years now because I have only used it about 5 or 6 times – each time I am thankful for having them.