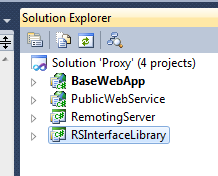 Before I jump into this, I just want to explain that Remoting is an old .Net v1.1 technology and it is no longer supported. However it still gets the job done if that is what you are using already or if you need a really old code to talk to a really new code and you are not at liberty to use WCF. The following example I am going to provide shows .Net v2.0 talking to .Net v4.0. If you have the opportunity to design something from scratch with the time to learn how to do it correctly; please use WCF instead of Remoting. There is no point in using old coding if you can use the new stuff.

In this example you need to understand that there are two parts to Remoting always, there is the Client or Consumer and the Proxy or Remoting Server. Remoting is great for exposing parts of a dll to an older .Net version or to avoid dll hell in a sense. You can have a centralized location for your main or base dll and just have other components point to it. The benefit here is to not have to make sure that all locations have an exact copy of the latest dll (hence the mention of dll hell).

There are some basic parts that are involved in remoting and keep in mind a lot of these same concepts are now used in WCF. Remoting requires the following to work:

Here is a picture of the projects I am used to using and seeing when I work with remoting:

So to recapitulate, the right way to think about this is to think about these projects in pairs… kind of. Lets have two groups:
Groups A and B speak to each other via the RemotingServer, but must have the RSInterfaceLibrary in common because it is their Contract with each other. This is an implicit concept in Remoting. For WCF it is an explicit concept now, which helps in my opinion. I can’t say this enough, MAKE SURE THE INTERFACE LIBRARIES ARE IDENTICAL!

On to the Code. How does this all work?

I like to think of all this as creating pipelines, because essentially that is what this all is. You are creating a tunnel from point A to point B or rather from Group A to Group B. Follow these steps:

I like returning the current time because it is something that is constantly updating without me having to do it myself and it lets you know if something is working right now.

After implementing all of the above, make sure to compile everything and most importantly for the BaseWebApp and the RemotingServer you need to move the “RemotingServer.dll” and “RSInterfaceLibrary.dll” to the BaseWebApp’s bin folder. If you did everything right then this should work right off the bat.

One of the most confusing parts about the configuration is the Web Application’s side. Here is the explanation:

I got this information from here: http://social.msdn.microsoft.com/Forums/eu/netfxremoting/thread/cb2681e7-2b06-4dcd-af65-fed5981b93d8

There is ton’s more that can be done with this stuff. I recommend that if you are going to have multiple remoting servers for the same application don’t bother creating multiple projects, you can just use the same projects and just make sure to configure them properly. Here is an example:

This indicates that you have two additional classes “Gateway2.cs” in the remoting server project and “InterfaceLibrary2.cs” in the interface library project. I used the number 2 just to indicate that it is a second pipeline, but you can call it what ever you want.