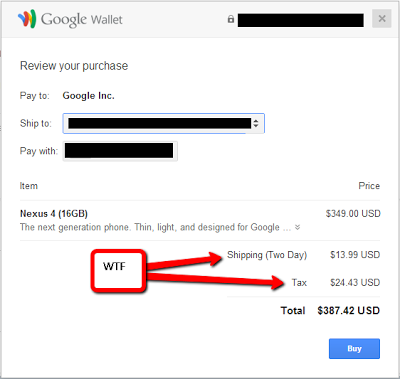 Introduction
I bought the Nexus 4 recently and I have to say I am quite satisfied with my purchase, however I was pretty disappointed and borderline pissed off about a few things that aren’t apparent until after you purchase the phone. However I would like to say that this phone is a MAJOR improvement over my old T-Mobile myTouch Q LGC800 which is a sad excuse for a phone when put next to the Nexus 4 which is also produced by LG. I am going to blame T-Mobile for the LGC800’s initial total lack of performance, but after rooting the phone and freezing all of the T-Mobile bloatware the phone still had some serious issues with Bluetooth and other unexplained problems that made the phone an overall drag to use. I am mentioning this because unfortunately some of those problems have carried over to the Nexus 4 it seems. Well off to the list.

LG Product Page
The Nexus 4 is also known as the LGE960. You can view it’s page here. You can download the user manual here as it does not ship with the phone; which is fine because it is something you would rarely look at anyhow. This phone is rather intuitive to use.

The Purchase Price is a Lie
Google Play advertises the phone for either 300 or 350 dollars. The price difference being that the 8GB phone is cheaper than the 16GB version. Well yes it is clearly cheaper by 50 dollars but since this phone does not allow me to use an SD card, I guess I am getting the 16GB version. Time to purchase the phone…

Cadillac Shipping
Okay so I know there was going to be shipping costs involved and I know the $350 was just the cost of the phone, but holy crap. I feel cheated here. You are NOT given a choice on a cheaper form of shipping, I was willing to wait another 2 weeks for free shipping or at least cheaper shipping. I am going to assume the shipping included product insurance.

County Sales Taxes
All I have to say is… wow. I guess they had to add taxes, but holy shit.

New Micro SIM Card
I had a regular sized SIM Card, so I had to purchase a new Micro SIM Card because apparently T-Mobile no longer changes them for free like they used to. I have been told you can cut the older regular sized ones down to size, but I don’t trust that completely. I’m not that adventurous, I just need things to work right now – too busy for experiments.

New Belt Case for Phone
This phone is flat, skinny (small height), but wide in both length and width. I needed a new case with belt loops so I could keep my phone on my person. I am not one of those people who can just slip it into their pocket and not feel that it is going to be shattered in my pocket or left somewhere because I forgot to put it back. I bought this case: Krusell Hector 3XL Premium Leather Universal Case with Beltloops for SmartPhones with 4.3 / 4.8-inch Screen-Black.

Total Overhead from Unexpected Costs
$41.19 – Paid another 10.63% on top of the $387.42, this is not Google’s fault – but T-Mobile not switching out my SIM for free is not very fair and I cannot operate without having a pouch for my case so that is my preference.

The Silver-lining
This was still cheaper than buying the phone anywhere else.

The Storage Space is a Lie
So I bought the phone for its 16GB and well I expected 16GB of free space. The phone has 16GB alright, but what they don’t tell you is the OS has already used up 4GB of it. So you have 12GB of free space. Not the end of the world, but not very fair either.

Problems with the Phone
There are problems with Bluetooth and WiFi. I have had to restart my phone already several times because either Bluetooth stopped working or WiFi stopped working or both. There are reports about this all over the place and Google/LG has already started rolling out updates to fix the problem. I am tempted to root the phone and just use CyanogenMod. I am going to blame LG for this because these problems are far too reminiscent of what I had to deal with – with my old LGC800.

Minor Complaints
I don’t care for the layout of the phone all that much. I don’t like how there is a Google bar that is permanently affixed to the top of my screen. It cannot be removed. Adding widgets to your screen is a bit of a lengthy task since you have to look through your app drawer for them and scrolling through them is not quick. I am also concerned about the battery life of the phone, when it comes time to replace that battery what are we facing here? Can I do it myself?

Conclusion
This is by far the best phone I have owned so far. It is very fast, it does not lag which is my favorite part and it is very usable. The quality of this phone has offset the overall hit to the wallet which was a hard one, but I hope to hold on to this phone for as long as possible.