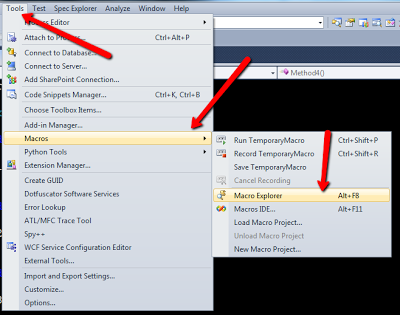 I just wanted to share some very basic things that you can do with Visual Studio Macros. This explanation will be valid for both Visual Studio 2008 and Visual Studio 2010, I can’t vouch for anything earlier because I don’t use them (I used to use Visual Studio 2003 a lot up until recently…and I don’t miss it). I think Macros in Visual Studio are an overlooked thing that some people just toss aside as “Why the hell would I need to use this?” well I can give you a few good examples of where it is useful. Mind you though, I am pretty sure I am only using like an 1/18th of Macros usefulness.

Why would I want to use Macros?

You would want to use Macros to save yourself time and frustration. Do you have any repetitive text that you have to type over and over? Especially for those times where you have to add a new argument to a bunch of methods or if you want to add a comments stub to something. If you answered yes, then you might want to start using Macros to help you do your repetitive typing for you.

Where do I begin?

Here is a simple example that I use often:

So those are the most basic examples of Macros and at this point that is all I am interested in knowing so that is all I have to share. In order to edit or delete a Macro just use the Macro Explorer window and right click on the individual Macros to maintain them. You can pretty much do everything from the Macro Editor Window.


Please consider providing me with a monetary tip for the time that I put into making these quality blog posts or software I have written that you may be using. Blog posts can take anywhere from a few minutes, to a couple of hours, to several days to construct. Software is a constant work in progress.