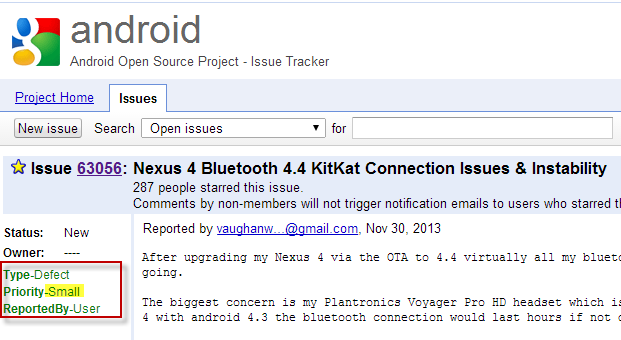 After I upgraded my phone from Android 4.4.1 to 4.4.2 my Bluetooth stopped working properly. I would be in my car (2012 Hyundai Elantra), connected via Bluetooth – on a call and about 1 or 2 minutes in my call drops. I thought that was strange and possibly just a hiccup, because stuff happens… Whatever, so Bluetooth reconnects, call continues, drops again after 10 seconds, reconnects, drops again after 10 seconds, reconnects drops again… this continued indefinitely until I turned off Bluetooth. Wow – that’s very strange… Restarted my phone, tried again, same result. Instant outrage because I knew immediately this was tied to the Android OS upgrade I performed the night before!

“Okay… “, I thought to myself, “Google isn’t Apple so they wouldn’t treat us like a bunch of suckers would they? Noooo, I’m sure they will admit they made a mistake and they will be fixing the problem promptly – I mean hell this is their flagship well known product that I bought for $320 dollars – they will make this right.”

I couldn’t be more wrong…

I tried emailing Google Play support. That went no where – they wouldn’t acknowledge the problem’s existence and basically blamed me saying I installed an application that caused the problem. I told them they were wrong and that all the problems started happening after I upgraded to 4.4. Then they told me to do a factory reset, I just stopped talking to them after that. I was then prompted to leave them a customer service review – I gave them a very big piece of my mind.

Long story short – google refuses to acknowledge the problem from their support level; and the Android developers don’t care about the problem it feels like since it was marked as a small priority… Nice…

The Stupid Work Around to the Very Stupid and Unfair Problem
I really hate this solution because it causes other obvious problems. In order to work around this issue simply turn off your WiFi when you are using Bluetooth. *Sigh* Not the greatest solution, but at least it works. I have seen other users report this as a solution and I have been doing this for weeks now. It works consistently.

Well here is the good news, I made a meme for the problem – hooray!

Conclusion
I take very big issue with paying a lot of money for a product, then the product’s main features made useless by the manufacturer. Then to top it off, they won’t acknowledge and/or fix the problem. I think I am going to abandon Android all together, this really just pushed me over the edge. Developing for Android is a total pain in the ass anyhow.

People have told me, “Dude just downgrade to Jellybean 4.3” or “Just root your phone and install a Cyanogen”. Yeah I know I can do those things, but I didn’t dick up my phone – google did. This is google’s fault, google needs to fix the problem or else I don’t want to be a Android consumer anymore. Push comes to shove I will just flash my phone, but blehhhhhh… I don’t wanna! I just need my phone to work!