SQL Server 2008 R2 will not install – Unhandled Exception has occurred in your application. 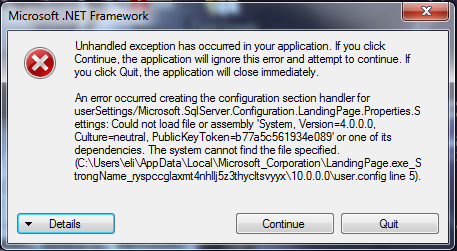 This is a fun installation problem it almost made me pull my hair out trying to figure it out. Concerning installations I honestly feel that there is nothing worse than an Installer NOT installing! I would rather a program install and not work, rather than have the damn installer fail. Just like Visual Studio 2008 and even Unreal Tournament 2003. Going on a tangent, the installer for UT2K3 was horrendous, if you didn’t switch discs out fast enough and the disc didn’t spin up fast enough the whole installation would fail. Genius… Those installation DVDs were very fickle.

The Contents of this Error

The Stupid Fix to this Stupid Problem

This is really one of the most annoying installer problems I have ever run into and the stupid fix to this is to:

All of the dots represent a bunch of alphanumeric characters that really mean nothing to me and I can’t guarantee that they are the same for everyone, so use your imagination. It should look something like “ryspccglaxmt4nhllj5z3thycltsvyyx”. If you are afraid to delete the files, then back them up first if it will make you feel better about deleting something you don’t recognize – I can’t blame you it’s almost like messing with the registry.

The most ridiculous part is if you look in that directory after the installation is finished you will notice that the folders are back?! I suspect this whole mess happened because this installer assumed that those folders and files wouldn’t be there, but it wouldn’t overwrite them either. What an annoying error…

29 thoughts on “SQL Server 2008 R2 will not install – Unhandled Exception has occurred in your application.”