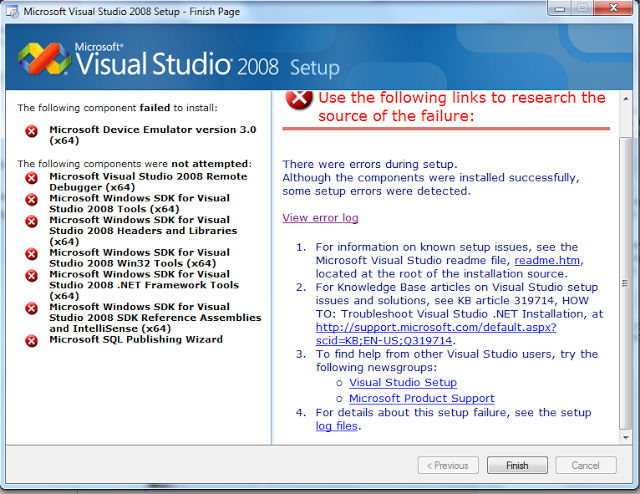 Like most Microsoft installations, ever individual’s experience installing the same piece of software can be very different. I must be special because I had particularly bad luck installing Visual Studio 2008. Only once did it install with no problems for me, but on many other occasions my instance would only partially install and leave out the most important part of the installation – the debugger! You know, the thing that makes Visual Studio worth using, the one thing that make Visual Studio King in the land of IDEs; aside from its other numerous achievements – the debugger is incredibly necessary in order to program effectively.

Here is the dreadful Installer Screen of Death that I would encounter no matter what OS I installed it on. I installed this on XP, Vista and Windows7. I would install this from an ISO that I would mount on a virtual drive, not even a CD. I tried several copies and they all failed the same way.

So on to the point of this post, in order to install the debugger yourself (which I would have to do after every failed installation) you need to navigate the Visual Studio 2008 ISO or Disc and look for the debugger installation:

Let’s assume for argument’s sake the CD drive or Virtual Drive is the Letter “D”. Depending on your CPU architecture choose the installer path x86 vs. x64 etc…

I know it says Remote Debugger, but you can ignore that word since you will be requiring it anyhow. Plus if you look at the screenshot above, that is exactly what didn’t install anyhow. The rest of the crap that didn’t install I never needed or missed. If I did need it, I would install it just like the debugger. If you don’t install the debugger – well then you simply cannot debug your code and Visual Studio will let you know this as soon as you press the play button or F5 with an annoying pop up box, which I wish I could show you, but I forgot to take a screenshot of it before fixing my installation. Take my word for it, it says something like “Remote Debugger could not be started – it is not installed.”